How Does Sugar Influence Gout?

For centuries, gout was known as the disease of kings, brought on by overindulging in food and alcohol. Now it’s common among the common folk.

Have you ever woken up to a hot, throbbing, painful big toe? That’s known as a gout “flare”, a sudden, intense pain with redness, swelling, and tenderness in a joint. The lingering discomfort may last a few days to a few weeks. 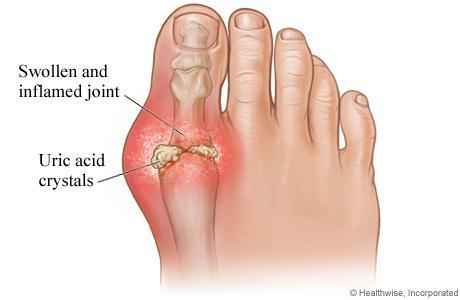 Gout usually starts in the big toe but can also start in the ankles, knees, elbows, fingers and hands.

Gout is the most common inflammatory arthritis found in men.

It starts with purines. We get them in two ways.

First, they naturally occur in the body and are the building blocks of DNA and RNA.

The body breaks down the purines forming uric acid. Usually the body handles it by passing the uric acid in the urine.

But when there’s too much uric acid, the kidneys can’t cope and that excess uric acid travels around in the blood forming crystals (monosodium urate). Those crystals lodge and build up in the joints causing the awful pain.

How does sugar play into this?

Purines are released when your body breaks down fructose. (The “F” word) And it happens within minutes of consuming fructose.

“According to the Arthritis Foundation, a 2008 study indicated that men who drink two or more sugary sodas every day are at an 85 percent higher risk for gout than men drinking less than one soda a month.”

And let’s not leave out the women:

“According to a 2010 study, the risk of gout for women drinking orange juice daily was 41 percent higher than women who rarely drank orange juice.” (Just eat the whole fruit!)

Left untreated, gout will cause permanent damage to the joint, just another casualty of sugar.

Stress and anxiety add to gout as they release inflammatory chemicals into the body.

It is a vicious cycle. Sugary foods are known to increase anxiety, and often people reach for a supposedly comforting treat when feeling anxious. Don’t get caught in that loop!

Sign up now to get the latest news, updates, and information about Sugar Detox and Sugar Addiction.

There are no comments yet. Be the first one to leave a comment!